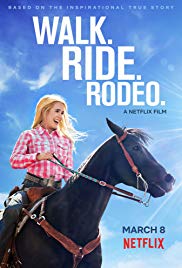 
"Walk. Ride. Rodeo." was a previous assignment. The script went into turnaround and was subsequently purchased by Netflix. Filming has completed, and the movie was released in 2019.

After being paralyzed in a car accident, rodeo rider Amberley Snyder is told she will never walk again, much less ride. Without the use of her legs and confined to a wheelchair, the daughter of former Los Angeles Dodger Cory Snyder fights to regain her dream of being a pro rodeo champion. Desert Wind Films

Feature Length Spec Script A “retired from show business FOREVER” ex-musician must get his old 1960's British rock band back together for one last gig. Problem is, most of them still hate his guts…
Especially the girl he left behind.

Dango Forth
Columnist for SCRIPT magazine, the leading source for information on the craft and business of writing for film and television for over 15 years. ASSIGNMENTS have included RIDING ON FAITH, the true-life story of inspirational rodeo champion Amberley Snyder, the feature length screenplay adaptation of NY Times bestselling author Col. Walter J. Boyne's novel, DAWN OVER KITTY HAWK, and the screenplay adaptation assignment for New Baby Productions' sci-fi graphic novel, THE CHRONIC ARGONAUTS. Some scattered screenwriting awards here and there... A bit of screenplay ghostwriting...